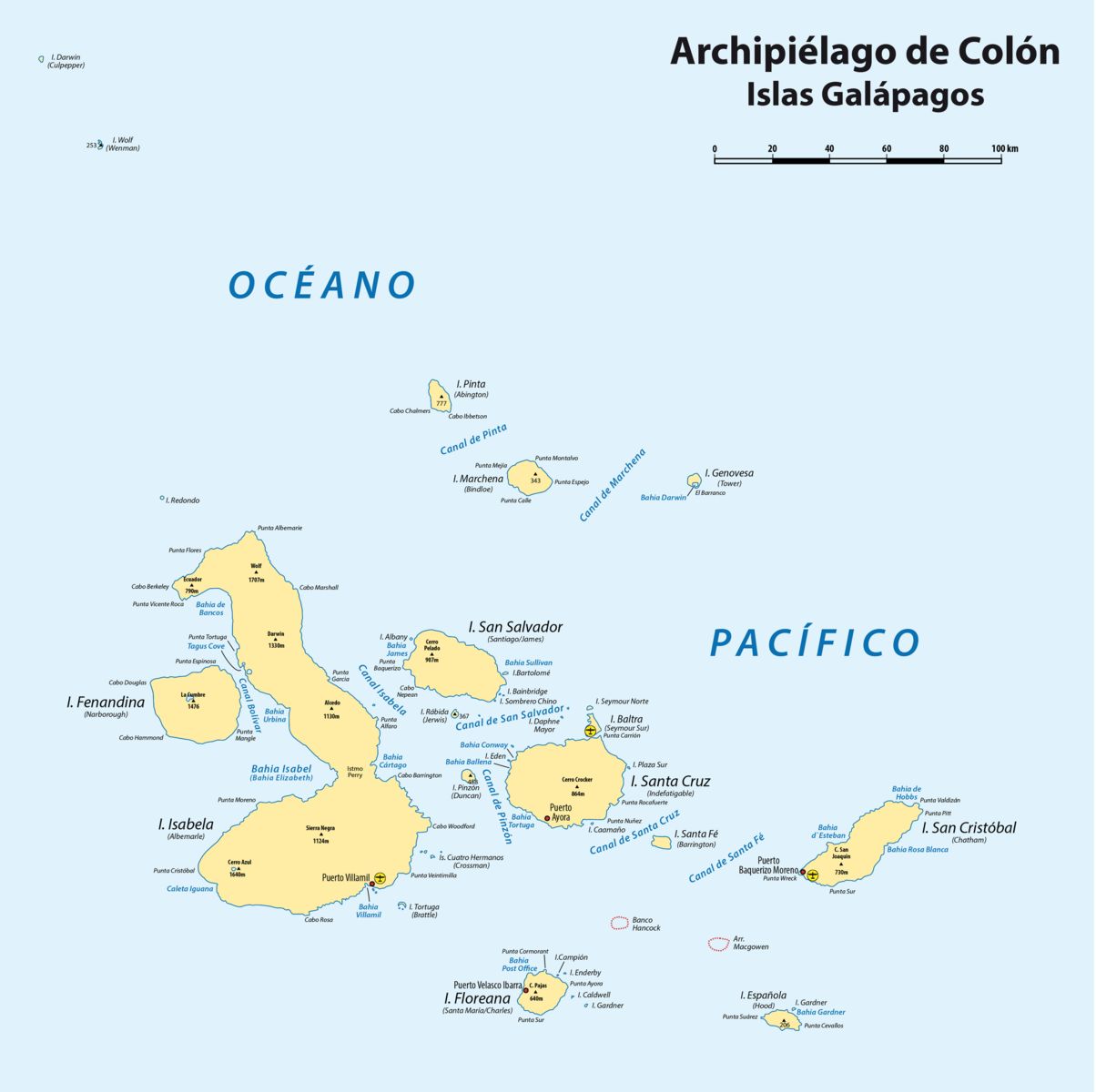 Floreana Island was formed by now-extinct volcanic activity and is old enough for several endemic species to have evolved here, such as the Charles mockingbird, Floreana lava lizard, Floreana snake and a subspecies of giant tortoises. Floreana’s human history is particularly interesting: early settlers left a legacy of scandal, murder and intrigue. Today, only a few human inhabitants still eke out a living in the hills and the tiny settlement of Puerto Velasco Ibarra.

Isabela is the biggest island of the archipelago and occupies about 60% of all the land area of Galápagos. It was formed by the volcanoes Cerro Azul, Sierra Negara (Santo Tomas), Alcedo, Ecuador, Darwin and Wolf. Sierra Negra volcano last erupted in October 2005 and with about 10km (6,2mi) in diameter it is the world’s second largest volcanic crater. Isabela is the third-most populated island. The island has several unique animals, including the worlds’ only surviving population of mangrove finch, and giant tortoises that have been isolated long enough on their respective volcanoes to evolve into distinct subspecies.

San Cristóbal is one of the few islands that have permanent settlements. At the south end of the island there is the sleepy capital of the province Galápagos, Puerto Baquerizo Moreno. Already at the dock you are greeted by the loud calling of sea lions. If you look closely you can see sally light foot crabs, marine iguanas, frigate birds and the endemic Chatham mocking bird not far from town

Santa Cruz Island is located in the middle of the archipelago and has an area of 98.555 hectares. Puerto Ayora with 15.000 inhabitants is the largest human settlement on the islands; the dozy and tended town encircles the bay. Apart from the highland with volcanic craters, lava tunnels and huge tortoises, there are beautiful beaches and bays with sea lions, marine turtles and seabirds.

The outlying Genovesa Island is situated in the north eastern part of the archipelago and the only island north of the Equator that tourists are allowed to visit. It’s a small, relatively flat island and the rim of a sunken crater that forms Darwin Bay, a natural harbour 2,5km (1,5mi) wide. It is the best place on the whole archipelago to observe a colony of red-footed boobies and the great frigate birds. It is also home to sea lions as well as fur seals.

Bartolome has a stair case to its summit from where one can obtain a great view of both bays and towards Santiago. This island is famous for its Pinnacle Rock, where sea lions and penguins can be seen. While on the southern side, there are nesting sea turtles (in season). The beach is great for swimming and snorkelling, close the shore you might see white-tipped reef sharks.

Santa Fe Island, also called Barrington Island after admiral Samuel Barrington, is a small island of 24km² which lies in the centre of the Galápagos archipelago, to the south east of Santa Cruz Island. Geologically it is one of the oldest, since volcanic rocks of an age of about 4 million years have been found. The vegetation of the island is characterized by brush, palo santo trees and stands of a large variety of the prickly pear cactus Opuntia echios. Among animals, Santa Fe is home to one endemic species and one endemic subspecies: the Barrington Land Iguana (Conolophus pallidus) and the Santa Fe Rice Rat (Aegialomys galapagoensis bauri). The visitor site is a wet landing located in Barrington Bay on the north eastern side of the island. Large numbers of sea lions are found on the beaches in the bay, occasionally hindering peregrination to the two trails leading from the beach.

Española Island is located in the extreme southeast of the archipelago. On Española Island you can see the Waved Albatrosses and the mating dances of blue-footed boobies.

Two spots are especially popular with visitors: Bahía Gardner, which has a lovely beach; and Punta Suárez, of interest because of its varied bird-life. This island has its own species of animals, such as the Espanola Mockingbird, which has a longer and more curved beak than the one on the central islands; the Española lava lizard; the Marine Iguana of the subspecies venustissimus, which has red markings on its back; among others.

Fernandina is the third largest, the youngest and westernmost island in the Galápagos. Punta Espinoza is a narrow stretch of land where hundreds of marine iguanas gather in large groups on black lava rocks. The famous Flightless Cormorant inhabits this island, as well as Galápagos penguins, pelicans, rice rats and sea lions. Mangrove forests also abound on the island. Fernandina is considered the most pristine of the Galápagos Islands and has had no species of mammals introduced, which sets it apart from most of the other islands in the archipelago.

Rabida Island is also known as Jervis and lies 5km (3mi) south of Santiago. Due to a high percentage of oxidized iron in the composition of the lava, the island has a reddish pigmentation. This is one of the best places to see pelicans nesting while sea lions haul out. Near the beach, there is a salt-water lagoon where flamingos and white-checked pintail ducks can be seen, although during the 1900's the flamingos have not been seen lately. There is a trail that will take you up to a volcanic peek covered with palo santo trees, from where the red colour of the beach and volcanic formations can be appreciated. At the end of this trail there is an excellent snorkelling spot.

Santiago is the fourth largest island in the archipelago and has several great visitor sites. One of the best sites is Puerto Egas, south of James Bay and west side of Santiago. There is a long lava shoreline where eroded rock formations house an excellent variety of wildlife. Marine iguanas bask in the sun feeding on exposed algae. The tide pools contain many Sally Lightfoot crabs, which attract other types of hunters. Following the trail further seals are found. Puerto Egas is not only a good spot for taking pictures but also perfect for snorkelling and seeing many species of tropical fish.