Travel through Jordan on a comfort-style adventure.

The sweeping desert and echoing formations of Wadi Rum, the hidden, hand-hewn facades of Petra and the ancient Roman ruins at Jerash all make Jordan a true adventurer’s paradise. With its sole focus on Jordan, this an inspiring Middle Eastern journey.

Ahlan Wa Sahlan! Welcome to Jordan, a cosmopolitan and contemporary city steeped in biblical history. On arrival at Amman's Queen Alia International Airport, you will be met by our representative and transferred to your hotel and your adventure begins by meeting your group at 6 pm.

If you do happen to arrive early, highlights include the citadel with its amazing sweeping views of Amman, the Jordan Museum – home to the Dead Sea Scrolls – or the Roman Theatre, right in the middle of downtown Amman. Either way, get out on to the streets this evening for an optional group dinner or to explore on your own and pick up a coffee from one of the cafes, partnering it with an ara’yes, a toastie filled with spicy mincemeat.

After breakfast today you’ll  journey down the Desert Highway to the spellbinding Wadi Rum (4.5hours), a landscape of rugged sandstone mountains standing tall among an ochre desert floor. Meet your Bedouin hosts on arrival, then take a browse around the excellent and informative visitor's centre and some free time for lunch before heading into this desolate, romantic area.

Transport into the Rum is by way of rather rickety old jeeps operated by the local Bedouin community, part of an attempt by the Jordanian Government to bring much-needed income into this region - an initiative we also support. They are safe and good fun. Take a tour including a visit to several of Wadi Rum's distinctive rock formations and an opportunity to soak in the vast silence and spectacular desert landscapes.

Meet up with your new Bedouin friends and ride camels to your traditional Bedouin tent situated deep within Wadi Rum. The Bedouins live in scattered camps throughout the area and you'll enjoy an evening with at one of these camps.

Enjoy a spectacular sunrise at your desert camp and maybe check out a few more of the local Wadi Rum sites or just take a walk through this vast emptiness. Depart Wadi Rum mid-morning for the city of Aqaba on the Red Sea. Check into your hotel on arrival and head out for a brief orientation of Aqaba with your leader. The small Ottoman Mamluk Fort, dating from the 14th century and from where Lawrence of Arabia rode to Cairo, is worth a look.

Otherwise, most of the fun is to be found in the water. Acquaint yourself with the hotel's pool or head to the beach – some of the best snorkelling in the world can be found around the untouched coral reefs just south of the town.

This morning enjoy some relaxation time in Aqaba before travelling to the fabled city of Petra. This site remained unknown to the Western world until 1812, when it was discovered by Johann Ludwig Burckhardt, a Swiss explorer and was described by John William Burgon as 'a rose-red city half as old as time'. Simply put, it's an incredible ancient site you'll probably recognise from Indiana Jones and the Last Crusade if nothing else.

Check into your hotel and check out the the village, maybe ask your Leader about Little Petra or a local cooking class. If you are super keen to get a sneak peak of the rose city then your Leader will get you started, but remember you have a guided tour the next morning and all afternoon tomorrow to explore, don't wear yourself out on the first day.

Petra is justifiably on most people’s list of ‘must-visit’ places. It’s regularly cited as the world’s ‘8th Wonder’, and in fact made the list of ‘New7Wonders of the World’. Petra is the jewel of Jordan, the lost city of the biblical Nabateans. The iconic Petra view – the Treasury's glorious façade, glimpsed from the narrow cleft known as the Siq – is arguably the single most striking sight of the entire region. The Siq leads through the rock and is sometimes only a few metres wide, with walls soaring up to 180 metres on either side, and it is impossible not to imagine the armies and traders who made their way down here in the ancient times. Petra's greatest surprise, however, is its size.

With your guide you will explore the old Roman road, amphitheatre and several old tombs, then it is all up to you.  Maybe climb up to the Monastery – carved from a mountain summit and the site's second beautiful façade – from where you will have a magnificent view of the entire site. This is a memorable day exploring a truly extraordinary destination and is sure to be one of the highlights of your trip. There is a cafeteria on the site, where you can enjoy a light lunch.

Depart after breakfast the is morning for the ancient Crusader castle at Shobak which makes an imposing sight as you make the short drive up to it. It was originally built to protect the eastern flank of the Latin Kingdom and its trade routes to the sea, before it fell to Saladin in 1189. Stroll the site and discover a small chapel, original gatehouse, and find out where a long, dark secret passage leads. Continue half an hour to the ancient village at Dana, on the edge of the Dana Biosphere Reserve, where local artisans sell attractive silver jewellery and charms.

Drive on to Madaba (approximately 3 hours), home to a number of fine Byzantine mosaics. Visit the Greek Orthodox Church of St. George and see an impressive mosaic map of the Holy Land that clearly depicts Palestine and Lower Egypt around 550 AD. You will arrive in Amman in the late afternoon, where you can spend the evening in one of its several fine restaurants.

Today you will leave Amman for a short drive north (approximately 1 hour) to Jerash, once one of the grandest ancient Roman cities in the world. These are some of the best Greco-Roman ruins around. Reaching its zenith as a favourite of the emperor Hadrian, it has a striking collection of archways and theatres, baths, public buildings and colonnaded streets, and is a beautiful place to spend a morning exploring. Grand ionic columns encircle the city's centrepiece, the Oval Plaza, a wonderfully atmospheric place to linger after exploring Jerash's riches.

Then, you’d better have brought your swim gear as you can wash off the dust from exploring with a dip like no other. Drive approximately 1.5 hours to the shores of the Dead Sea, the lowest point on Earth (420 metres below sea level). This isn’t actually a sea but a super-salty lake (dead because of the lack of life in it) where the density of the water means you’ll go for a float, not a swim. Spend some time relaxing here and get some classic floating pictures. The mud here is supposed to have healing properties, so why not cover yourself from head to toe for a nutrient-rich natural mineral mud bath.

Afterwards you will return to Amman for the evening (approximately 1 hour). Maybe spend your final night at one of the many bars and restaurants in West Amman, or ask your leader about the traditional cafes dotted around the city where locals spend their evenings.

Your trip will end today after breakfast. Check-out time is usually around noon and you are free to leave at any time. If you have arranged a private airport transfer you will be advised of the pick-up time. Additional accommodation can be pre-booked if you wish to spend more time exploring Amman. 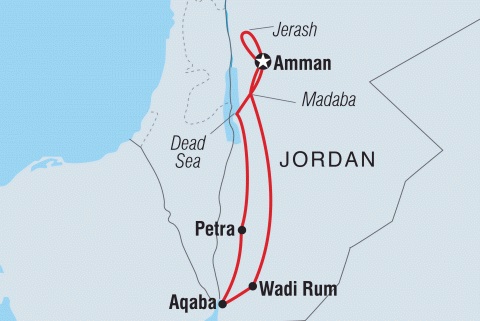 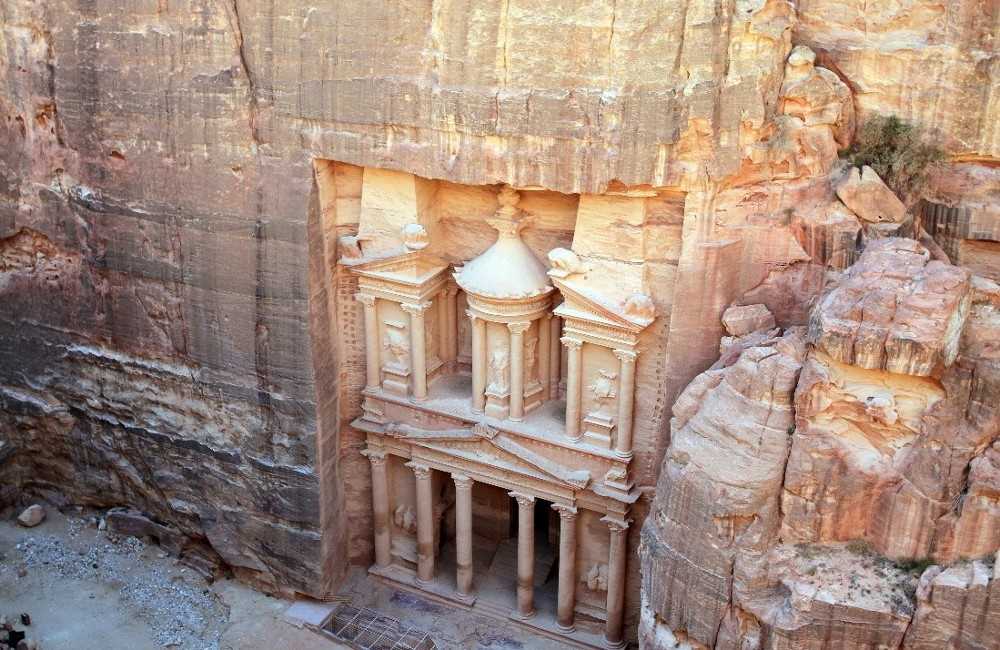 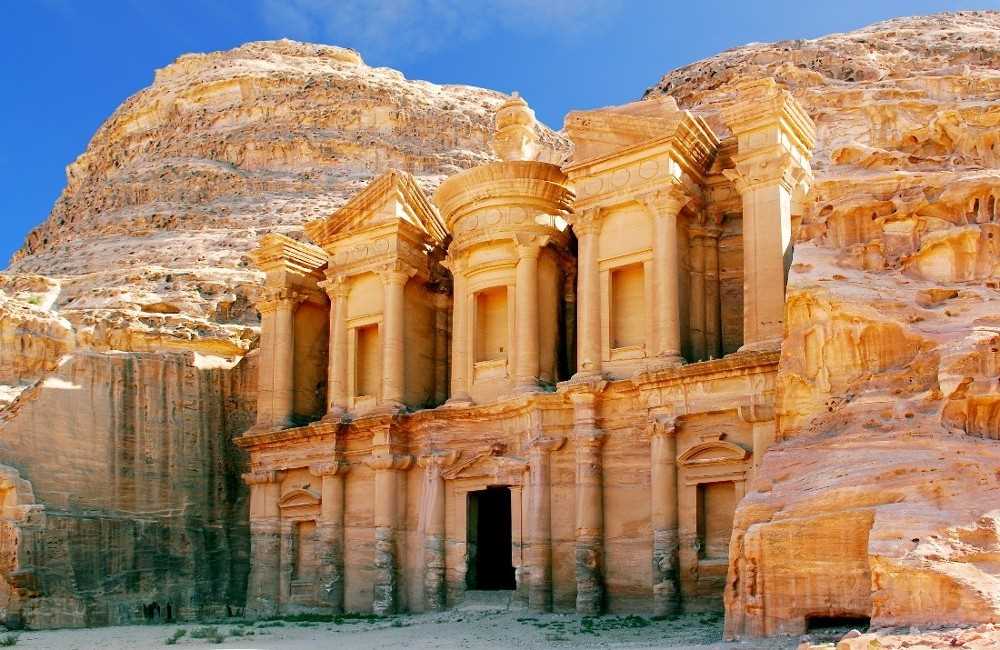 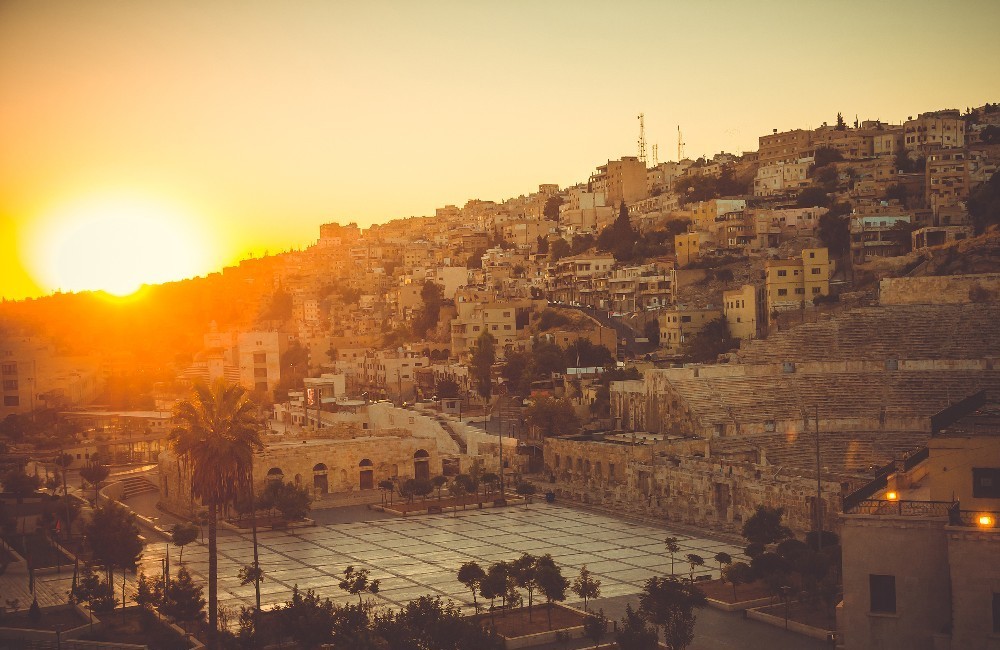 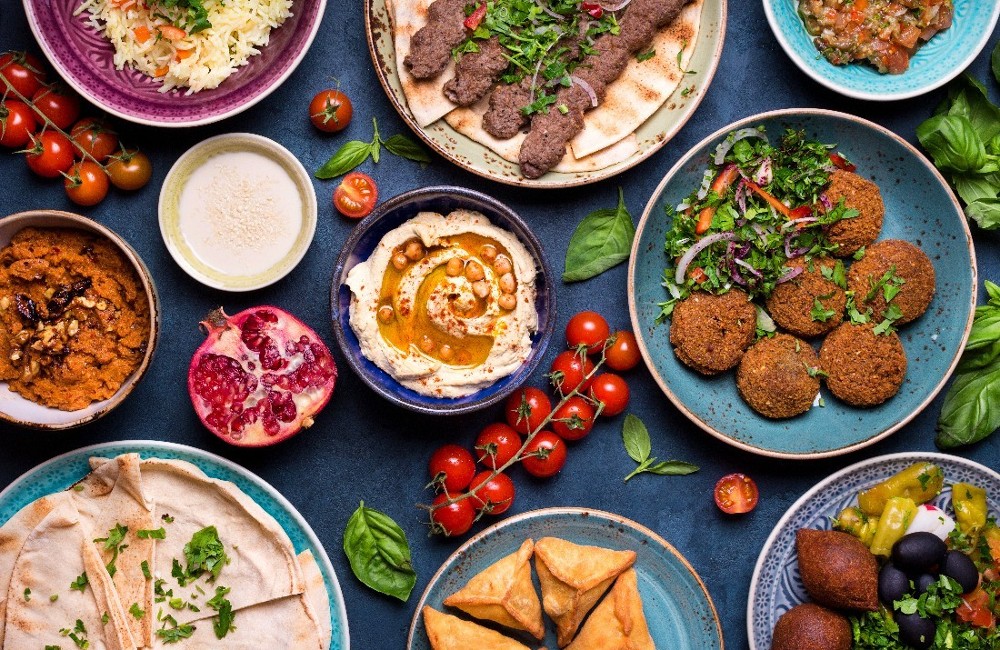