See nature documentaries and animal biology textbooks come to life on this seven-day sailing around the Galápagos' north and central islands. On this unique territory, you'll spot some of the rarest, most treasured animal species on the globe. See red-footed boobies at El Barranco (one of two locations to spot the bird), snorkel around underwater craters to witness incredible underwater life, and visit the Charles Darwin Research Station to spot giant Galápagos tortoises. The Eden is equipped with amenities that have your comfort and exploratory spirit in mind.

The Eden may be the newest vessel to join G Adventure's fleet, but that doesn’t mean she won’t know her way around paradise. Climb aboard to find room for 16 passengers, an expert CEO Naturalist Guide, and two top-deck lounge areas — perfect for relaxing after a day of exploring the Galápagos.

The adventure begins today. Feel free to explore, but make sure you're back in time to meet the group. Your G Representative will review the details of your tour.

Head to Bachas Beach where the sand is made of decomposed coral, making it soft and white, and a favourite site for nesting sea turtles. Spot abundant Sally Lightfoot crabs on the lava rocks along the water's edge -- these crabs will eat anything they can get their claws on! Trek to see a wide range of wildlife, including flamingos, hermit crabs, black necked stilts, and sea lions.

Visit Darwin Bay and marvel at the sheer number of birds along the many trails. Head to El Barranco in the afternoon to see the many types of boobies, including red-footed boobies. Snorkelling (Darwin Bay)

Visit this sunken caldera for a great snorkelling opportunity. See large schools of tropical fish swarming near the vertical walls, and, if lucky, see a manta ray or hammerhead.

Walk along the white coral sands of Darwin Bay surrounded by bustling sea birds. Follow the trail and see nesting frigatebirds, gulls, and boobies. Be sure to bring your camera to take some snaps of your new feathered friends.

Visit "El Barranco" aka Prince Phillip's Steps located on the southern tip of the island for an amazing wildlife watching opportunity. Hike up the steps to see a sea bird colony that is full of life including the breeding grounds for red-footed boobies and masked boobies.

Visit Bartolomé for a guided tour to see the island's dramatic volcanic features. Continue to Sullivan Bay on Santiago Island to witness the giant lava formations contrasting the white-coral-sand beach.

Hike to Bartolomé's summit for a stronger perspective of the islands' not-too-distant volcanic origins, and enjoy a panoramic view – it’s one of the best among the islands! See other Galápagos Islands in the distance as well as Pinnacle Rock, the island’s famous towering landmark.

Take the opportunity to swim and snorkel around Pinnacle Rock, one of the most iconic volcanic rock formations on the islands. Home to Galápagos penguins, friendly sea lions, sea turtles, and a huge variety of fish, Bartolomé and its surrounding waters are a fantastic place to explore the natural wonders of the Galápagos.

Visit Sullivan Bay on Santiago Island to see one of its star natural attractions – striking and fascinating giant lava formations. Very few plants have managed to survive on this island due to its harsh environment and relatively new lava flow. Enjoy a walk along the lava formations before coming to a white-coral sand beach, where abundant Sally Lightfoot crabs and sea lions gather on shore.

Search for marine life in the mangroves at Black Turtle Cove by panga, after, spot a variety of birdlife at Cerro Dragón.

Explore the mangroves by panga to find rich marine wildlife between the fresh and salt waters. Keep any eye out for manta rays and sea turtles in this tranquil ecosystem. Whitetip reef sharks can also be seen gliding by.

Visit Cerro Dragón (Dragon Hill) for some prime birdwatching. Take a short walk from the beach to a hypersalinic (saltier than the ocean) lagoon frequented by pink flamingos, common stilts, pintail ducks, and other species of birds. Pass through a Scalesia tree forest; endemic to the area, there are only 400 specimens of Scalesia trees left in the world.

Disembark in Puerto Ayora and visit the Charles Darwin Research Station to see the giant Galápagos tortoises. Fly back to Quito.

Visit Fausto Llerena Breeding Center a great place to observe many species of tortoises and land iguanas in captivity. Brought back from the brink of extinction, see the famous Galápagos tortoise up close – a corral houses adult tortoises, and a nursery cares for the young until around age three when their shells have hardened.

This area also houses the Charles Darwin Research Station, a scientific organization initiated in 1964, which works to preserve the Galápagos' ecosystem through the conservation efforts of scientists, researchers, and volunteers. While the offices themselves are not open to visitors, the research station provides a study location for international scientists and environmental education for the local community.

Depart at any time.

For more information please call us on 021 427 7094, email us at info@shandontravel.ie, request a call back using the red button or submit an enquiry through the form below. 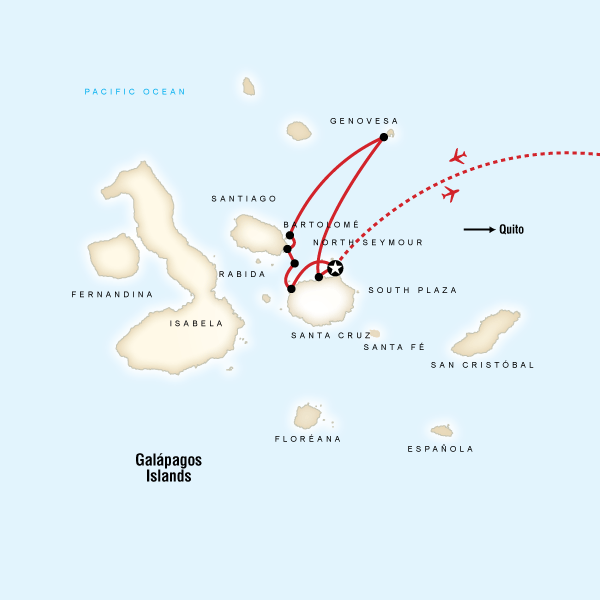 Eden at a glance

With eight dedicated crew members and one CEO Naturalist Guide familiar with the local flora and fauna, and certified by the Galápagos National Park Service, there’s always someone available to answer your questions. 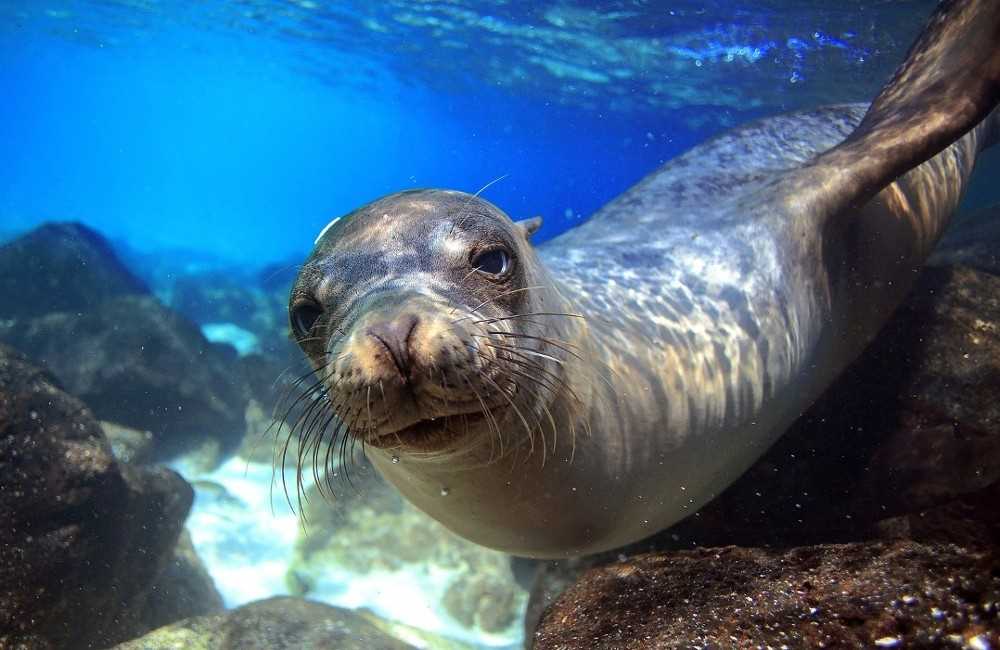 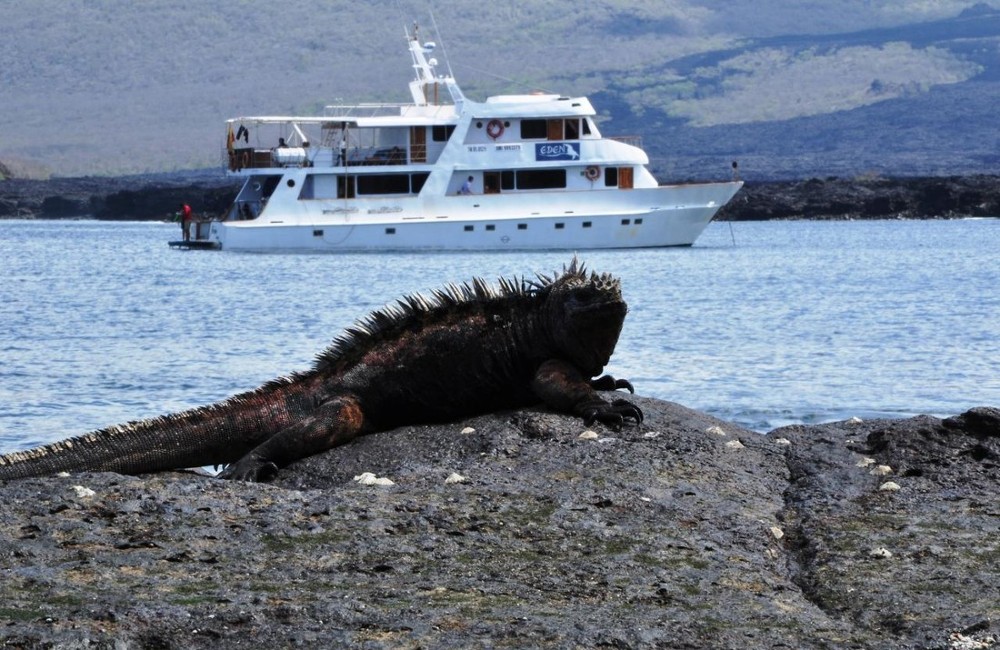 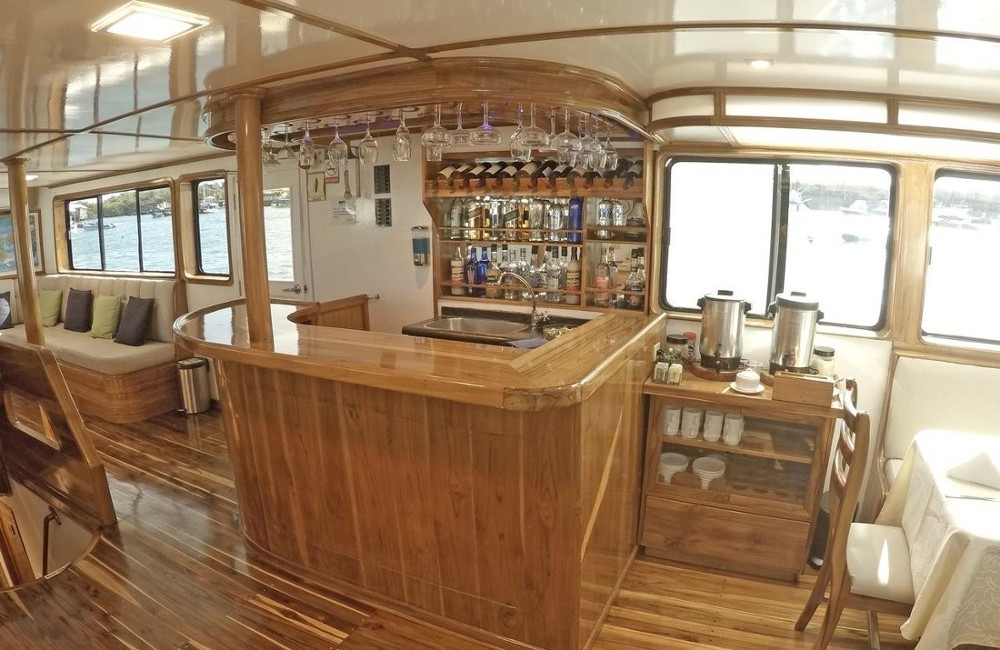 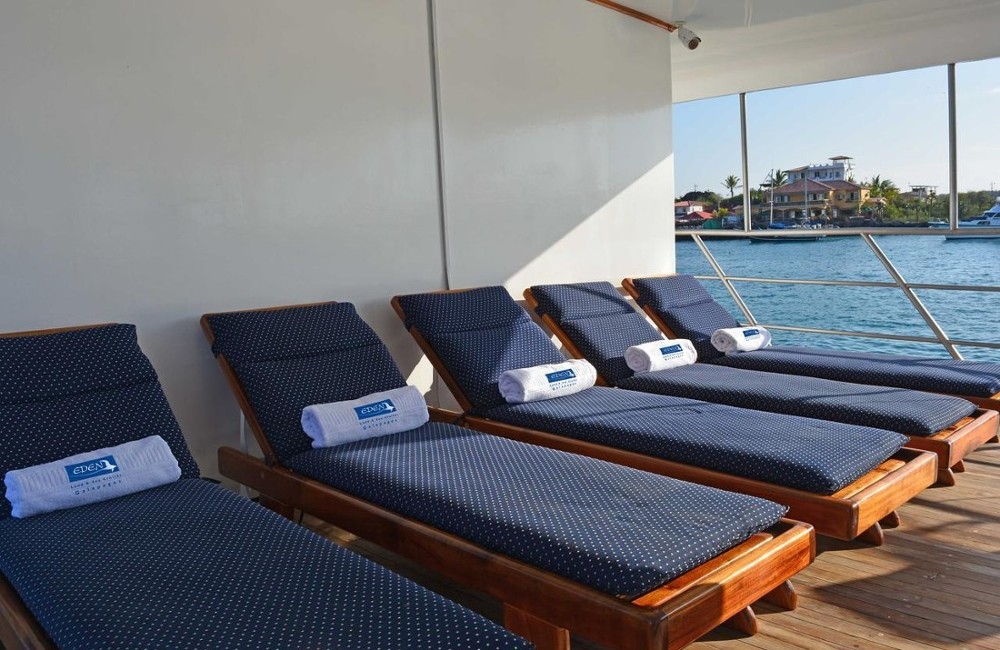 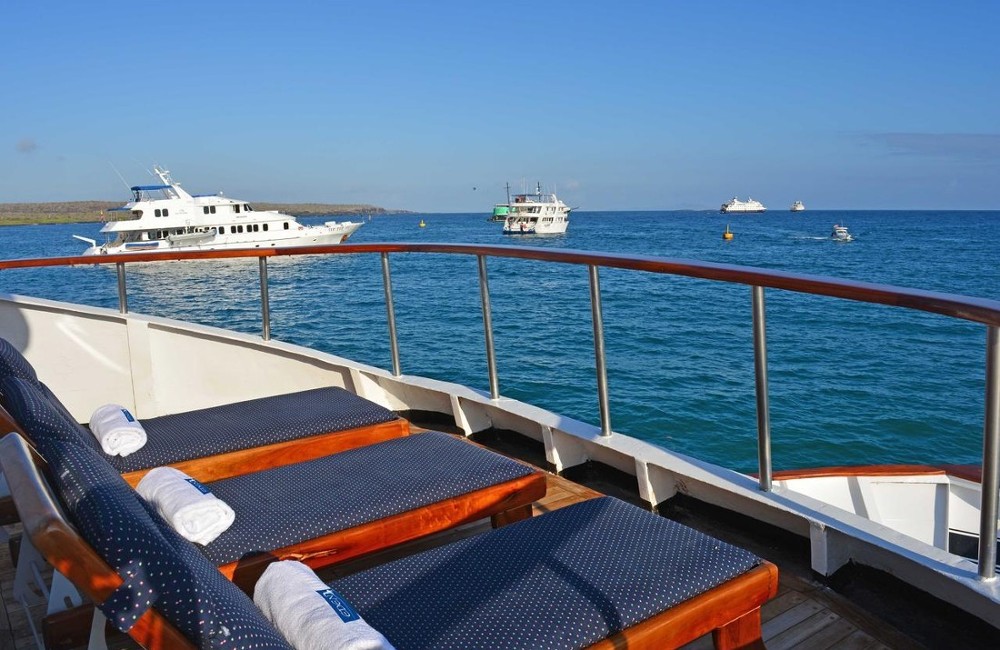 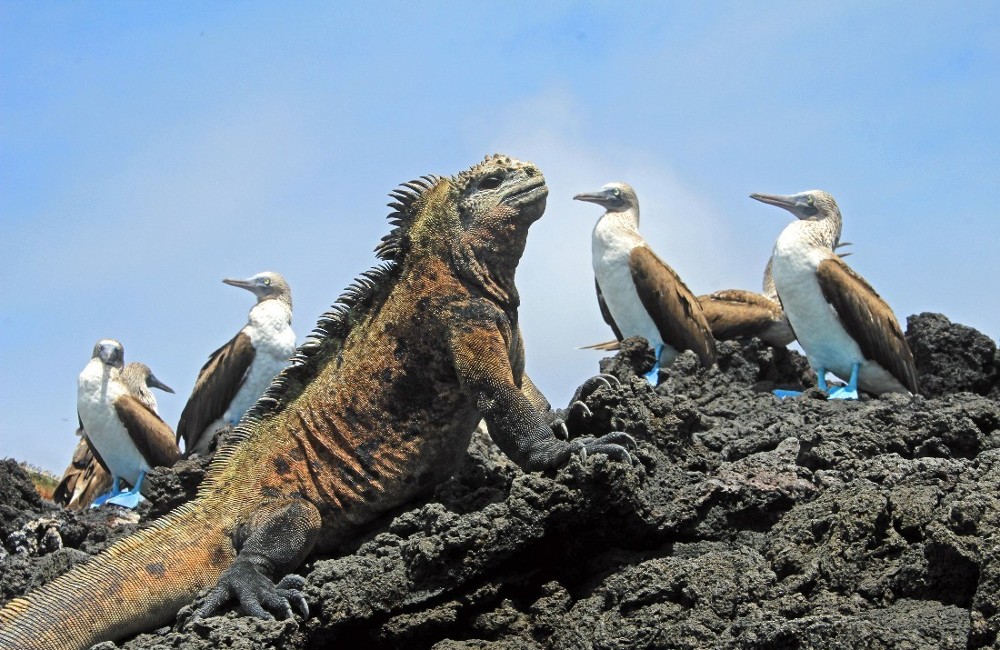 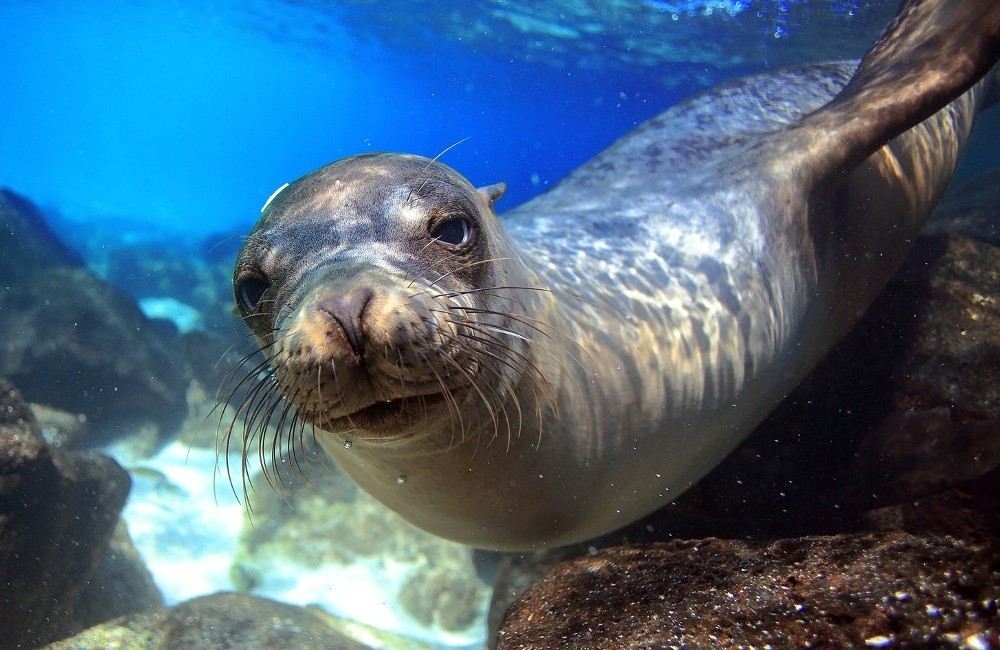