Journey through the breathtaking Canadian countryside and the Canadian Rockies onboard the luxury Rocky Mountaineer train.

Travel through the legendary Spiral Tunnels and pass by Craigellachie, the spot where the last spike on the Canadian Pacific Railway was driven. This is the only passenger rail service on this historic route, celebrated for connecting Canada from East to West. Traverse the Continental Divide and be inspired by spectacular mountains and dramatic canyons. If you’re a history buff, this route is for you.

Destinations Along This Route:

With unparalleled panoramic views from your seat in the upper-level of our custom-designed, bi-level glass-dome coach, you might find yourself “going for Gold” again and again.

​Price is based on 2 adults sharing and includes:

Sights along the journey.....

Find yourself where the CP and CN rail tracks overlap. The orange truss arch bridge, one of two bridges, is the largest single span bridge on the CN line at 247 metres (812 feet) long.

Black Canyon features a unique dark shale rock wall that towers above the tracks, providing a stunning contrast against the dark blue water below and the sandy hills that roll away above.

Don't mind the hair raising feeling as you pass by the Hoodoos - legend has it these formations are people turned into pillars through witchcraft.

Though you're moving forward on the tracks, you're actually going back to 1885 and the site of the 'Last Spike' where Canada's East and West were united by 3,200 kilometres (1,988 miles) of railway track.

Pass by Kinbasket Lake, an upgraded reservoir on the Columbia River just past Golden. Kinbasket's calm, blue-green waters are the perfect back drop for your photos as the train twists along the shore.

From here on, you'll be following the Kicking Horse River deep into the Canadian Rockies. Lucky for you, there aren't any bucking broncos to worry about.

Twist your way through a Swiss engineering marvel that was built by the Canadian Pacific Railway and 1,000 men. The tunnels have been impressing (and disorienting) rail travellers since opening in 1909. 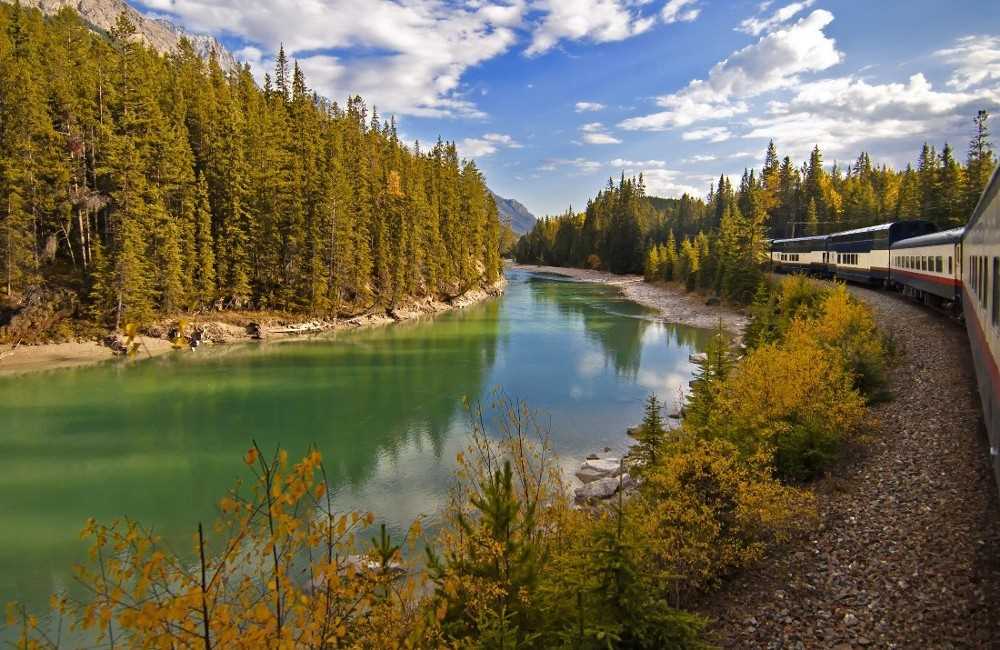